With the continuous improvement of people’s living standards, and the importance of the appearance of the image is getting higher and higher.
In the past decade, the global cosmetics market has shown a tough and steady growth, with no stagnation or negative growth in the past year.
Even in the year of the 2008-2009 global financial crisis, the growth rate slowed down and quickly returned to the historical normal growth level in the recovery.
This is because cosmetic consumers did not change the purchase behavior of cosmetics in the event of a crisis, nor did they reduce the value of cosmetics.
It can be said that consumers’ enthusiasm for cosmetics is higher than ever. The cosmetics market is an obvious seller-driven market with innovative features. Consumers are willing to pay for high-quality, high-performance products.
According to Orbis Research, the global beauty care products market is maintaining good momentum in the future and is expected to expand by 7.14% (CAGR) in 2018-2022, from 532.4 billion to 805.6 billion.
As shown in the following figure, Statista data shows that in the past eight years, the proportion of make-up products in the beauty care products market has increased, which is the highest growth rate.
In recent years, there have been many unicorn companies in the makeup industry, which quickly eroded the market occupied by cosmetics giants such as L’Oreal, Procter & Gamble, Unilever and Estee Lauder in a short period of time. 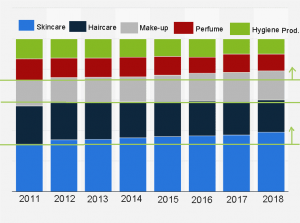 According to analysis by Euromonitor, a well-known market research organization, the United States currently has the largest makeup market in the world;
And it is the most promising market in developed countries (US cosmetics retail sales in 2017: 16.8 billion US dollars, estimated market development space to 2022: 3.3 billion US dollars);
Although Japan currently has the world’s second largest makeup market, its market has been deeply developed and there is little room for growth (similar to the situation in developed economies such as the UK and Germany).

China and India have the largest market potential due to their large population base and consumers are still being educated and being developed;
However, China’s retail sales (the third in the world) in 2017 and its space to be developed (up to the world’s first in 2022) are higher than those in India.
In addition, Indonesia, Nigeria and Brazil are the most densely populated countries in Southeast Asia, Africa and South America respectively. It is expected that the market will also expand significantly in 2017-2022.

Why The Cosmetic Giants Stick to Metal Packaging for The Semi-liquid Products?

How Big Is The Impact Of Packaging Material On Cosmetic Safety？

How Is Hair Dye Categorized?

Hair dye is a cosmetics dyeing hair, categorized into temporary, semi-permanent and permanent hair color, which is normally semi-liquid and contained in soft tube, such as plastic tube and aluminum tube and other soft cosmetic tube. Hair dye cosmetics have the effect of changing the color [...]

The In-cosmetic Global is the leading event about personal care ingredients. A lot of cosmetic manufacturers and producers are gathering there during 17~19th, April.  For more information, please link to http://www.in-cosmetics.com/about-the-show/

Two mammoth container ships have collided in the Pakistani port of Karachi in the afternoon on 19th, March– the accident was caused due to the collision of a container vessel name Hamburg Bay with the vessel Tolten own by Hapag-Lloyd,  sending huge shipping containers tumbling [...]