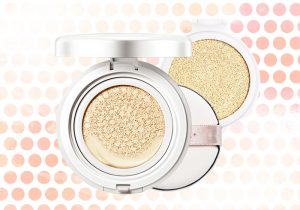 Cushioning makeup originated from the Korean. Due to the innovative design and convenient apply, with encourage from Korean idol drama, Korean cushion cream has been hot in the Chinese market in the past two years. However, data from BeautyResearch, an authoritative research report of the beauty makeup industry, shows that high-end brands from Europe and the America surpass the Koreas brands and occupied most part of China market. Driven by the high-end brands from French, the brands from Europe and America start to snatch the market share in China. Unlike the concealer cream used to be carried in soft aluminum tube or plastic tube, the cushion cream is packed in a plastic container.

The cushion cream came to use in 2008 from South Korea. Because of the convenient applying and preferable performance, it swept over the whole beauty area since it entered into the market. With the increasing consuming of cushion cream, many European and American brands tried to grab some market share. Brands like Lancome, Dior and YSL start to develop their own cushion design and make some break through according to Asian women skin. In recent years, the cushion cream from Europe and America become more and more popular in Asian.
BeautyResearch took samples from thousands of cosmetic shops from 7 countries in Asia and made analyze, and presented the individual category in Asian countries. According to the data, Lancome from French ranked the First as the best selling of make-up product and cushion cream in Asia. This encourage more and more European and American brands get into China market.

The Registration, Evaluation, Authorization and Restriction of Chemicals (REACH) is an example of strict regulations applicable to products manufactured and sold in Europe. In the United States, EPA has limited the use of C.I. 61 blue pigments due to their toxicity characteristics.  China also has [...]

Cosmetic Consumption During Jan And Feb Increased by 12.5%

The COSME Tech show in Japan is one of best cosmetic show in Asia with expanding visitors and exhibitors.  What’s more, the show is target platform for those high-end customers, who require high-quality products and service. Junsam packaging products Co., Ltd. attended the show held [...]

According to the statistics from the Ministry of Health of China, more than 180 factories were authorized to produce nearly 200 brands hair colorant products in 1998. At present, there are two consumer groups of hair dyeing products in China. One is the middle [...]

In recent years, with the number of visitors to Japan has increased sharply and some of them buy cosmetics in large quantities not for their own use, but for the purpose of making money as paying agents. This situation led to short supply of [...]

With the continuous improvement of people’s living standards, and the importance of the appearance of the image is getting higher and higher. In the past decade, the global cosmetics market has shown a tough and steady growth, with no stagnation or negative growth in the [...]

Why The Cosmetic Giants Stick to Metal Packaging for The Semi-liquid Products?